Buddha Footprint The Buddha never suggested that he was above other men and did not want himself to become a deity to be worshiped. Early art included him by representation, often by his footprints, or a wheel to represent the teaching. The powerful Ashoka had many impressive columns erected often with lions at the top symbolising the regal background of the Buddha.

So it was several hundred years after his death, in the first century AD, before statues of him began to appear. Clearly, this was not the era of mass merchandising. With the new Mahayanist revival, the Buddha principle was elevated to a higher level than ordinary man, and statues were used to encourage worship of these principles.

It became an act of faith to produce, or pay others to produce, Buddha images, and these would be given to the local monks for spiritual merit.

Early Buddha images were a composite of Indian Art and the Graeco-Roman fashion which influenced northern parts of the Indian sub-continent at that time. The earliest Budda images, in this style called Gandharan, usually showed the Buddha with flowing hair tied in a bun, full robes across both shoulders, and sometimes a moustache. Some features became standard, including the long ear lobes, and the bun of on top of his head. 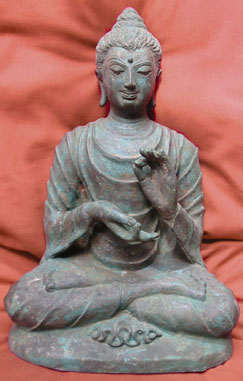 Gandharan Buddha Certain hand positions have come to represent the pose of the Buddha. Hands in the lap indicate meditation, and the hands in front of the chest, left under the right, show the Buddha teaching. One favourite position is that soon after the enlightenment, the right hand of the Buddha touches the ground, and he is seated cross-legged, which refers to Buddha calling the earth to witness his new state.

Also a common pose, usually standing, is the left hand raised as if in greeting. This represents compassion and giving, and is also considered to offer blessing. The walking Buddha, usually with one hand at his side originated in Thailand about seven hundred years ago.

The Buddha is often seated on a lotus throne. The lotus may be shown with eight petals, symbolic of the Noble Eightfold path. Lotus flowers were associated with purity and spiritual perfection, and are frequently used in Buddhist art. The deer is sometimes found around in the art form to represent the first sermon about the Four Noble Truths in the Deer Park.

Some positions relate to legends about the Buddha, such as the seated postition with the seven headed serpent who is said to have protected the Buddha during a great storm by forming a living shelter around his body. 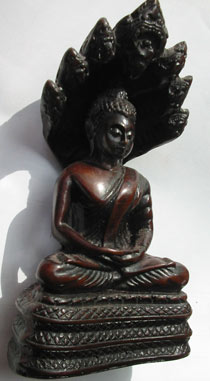 Murcalinda Buddha Another interesting Buddha is the Maitreya, in Japan, the Miroku Bosatsu, who represents the Buddha to come. Interestingly, he is usually shown seated in the Western position, with legs down and hands in a thoughtful position.

The death of the Buddha, his Parinirvana, is always shown with him lying on his right side, hand supporting his head. Although he was over eighty, he is still shown as a young man and clearly, meant to represent the passing, rather than to accurately depict it.

>As Buddhism travelled to different countries, each imposed their own style on the image. While it is difficult to generalise, Chinese Buddhist art was influenced by Confucian thinking and showed a high degree of order. In Japan, the respect for nature and for fine, clear detail produced some very simple, yet profound works. Indian art often reflects the sensual and the supernatural and this shows also in the art of Tibet.

In Buddhist countries such as Thailand, it is important to respect the Buddha image. The images should be set up off the floor, and the feet of those around the Buddha should never point towards the statue. Scarves may be offered to the Buddha image, food and fruit may be brought as offering.

Special permission must be sought to take a Buddha out of Thailand. This is to stop the image becoming a forgotten tourist item, and not treated with the required respect.

While particular Buddha statues in various countries are much loved and visited, most Buddhist groups will revere the Buddha mind, the teaching, rather than the image. 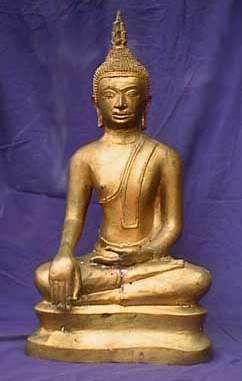