Although often associated with Eastern religions, the mandala, which is derived from the words for container (la) and essence (manda), has been used as a powerful symbol since early civilisations in ceremonial rituals and as an aid to worship, or meditation.

A mandala is a representation of the cosmic, the universe, in a circular pattern which leads to a central point. As such, it is a symbol or wholeness, of beginning and end.

Simple mandala have been drawn by many native people in many counties, including the early Australian Aboriginal people. Many Christian churches have a circular stained glass window, with the cross as the centre point of the circle.

In Buddhist mandala, the circles represent levels of the cosmos, and the squares generally depict earthly levels. The levels may have gates, which lead into the centre of the mandala. The mandala is used as an external expression to help find the universe within. Often, the mandala incorporates symbols or physical representations of the Buddha to show the transition of the spiritual journey 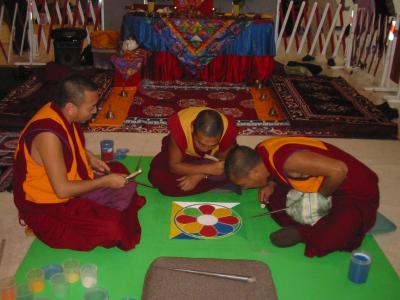 The mandala may be simple or elaborate, and may be painted, carved, or created in most art forms. It could be argued that a pizza is a modern day mandala, although it is rarely an object of great respect. Many old civilizations held the circular shape in deep awe, and sites like Stonehenge use the basic circular shape and this seems to touch some deeper part of most who visit there. Some Buddhist temples are set out in a large mandala shape.

In Buddhist art, complex drawings or paintings are made which represent various levels of existence. These are often very colourful and full of symbols, and are often displayed on special occasions. Creation of a sand mandala was a very special ceremony in Tibet and rarely viewed by outsiders.

The fourteenth Dalai Lama helped promote Buddhism by allowing the creation of sand mandalas to be experienced in the West. These are special events, and may take many days to complete. The mandala has an inner, outer, and secret meaning. Creating a sand mandala is said to purify and heal on these three levels. 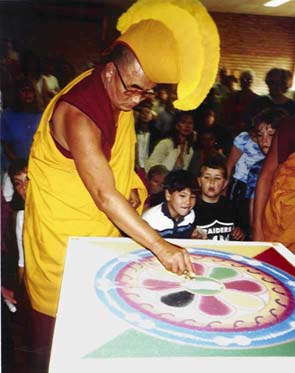 Firstly, the correct rituals must be observed, which includes symbolic dances and prayers. Then, there is ceremony to draw the mandala using stings dipped in chalk. The first sand is then placed in the centre of the mandala representing the Buddha, or Buddha mind. Often a lotus pattern, or other symbolic pattern will represent the Buddha teaching. Starting at the middle, the coloured sand is then carefully added, and an intricate pattern starts to appear.

Once completed, the main ceremonies are then begun, and these may include initiation to help to understand the mandala, and to help make a transition to a higher level. As always, meditation and compassion towards all living beings is at the core of the rituals. The mandala becomes the pure inner world where inner peace is reached.

At the conclusion of the mandala ceremony, the sand representation is cut through from all directions to the centre. The sand is then brushed to the centre, put into containers, and poured into flowing water to release the positive energy into the world. The mandala is now part of the experience of those who participated, and the experience, not the object is remembered. 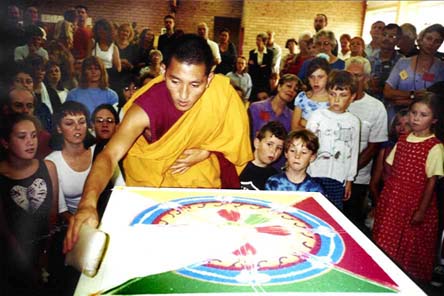