There are three main types of Buddhist architecture, these being the teaching hall, the residence, and a particular round shaped building called a stupa. A stupa is a structure which is usually round and originally shaped like an upturned bell. Sometimes these are solid, with no entrance, but most have a central chamber.

The stupa was based on burial mounds which were built in India before the time of Buddha, 2,500 years ago. Stupas were built to house the remains of the Buddha which were divided and given to different regions. From that time on, the stupa has been an important Buddhist structure.

The most common use of a stupa is as a place for sacred relics, and as a focus for the devotions of a Buddhist community. Walking around the stupa in a clockwise direction is considered as an act of merit. 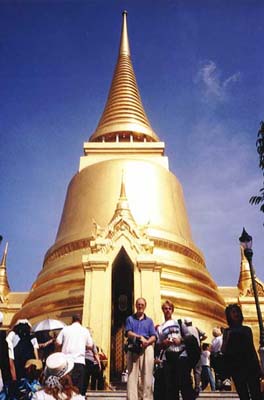 The stupas built in India were usually heavily carved. When Sri Lanka embraced Buddhism, stupas were also built there, however they are much less decorated. Traditionally, the main body of a stupa is always hemispherical in shape, with a square shape on top of that, with a round cone shape leading up to a traditional umbrella, and above this is usually a pointed top. In Nepal, eyes are added on the square section to represent the all seeing Buddha. Some cultures say that the stupa shape itself represents the body of the seated Buddha.

In the eighth century, King Sailendra of Indonesia sponsored the building of Borobodur, an enormous monument which incorporates numerous small stupas, leading up to one larger stupa at the highest point. In Tibet, the structure is called a chorten, in Sri Lanka they are referred to as a dagoba, and in China and Japan, the style changed and is called a pagoda.

Many Buddhist communities around the world are active in building new stupa or pagoda structures for the benefit of those who come.