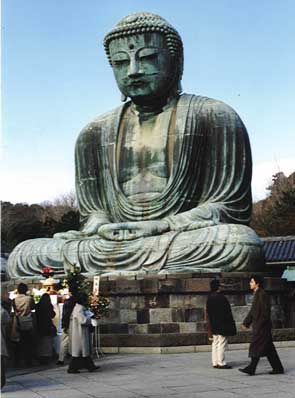 Early Buddhism split into two groups called Theravada and Mahayana, and the Mahayana group spread to China along the Silk Road.

Although Buddhism in Japan had major influences from China, it originally came to Japan from Korea when a gift of a Buddha image and copies of sutras were sent to the Japanese emperor in the 6th Century. Early Buddhism in Japan was very different than today, and at first formed an alliance with many of the existing Shinto groups. Over time, several schools of the Mahayana Buddhist philosophy evolved, but the main ones today are Pure Land and the Zen, both of which originally developed in China. A third school, the Nichiren group developed in most recent times and is based on the White Lotus Sutra teaching of the Buddha.

Pure Land is the largest group in Japan today, and of the three groups, Zen is the most well known by Westerners, although Nichiren also has considerable following in the West, where it actively works for world peace. Here we will look at Pure Land and Zen.

From its early origins in India, Pure Land Buddhism further developed in China around 350AD, and from 950AD spread to Japan becoming very popular in the 12th Century. Pure Land Buddhism follows a particular Buddha called Amida Buddha (also called Amitabha in China), the Buddha of infinite light, who is revered as divine.

Pure Land Buddhism originally appealed to the poor and less educated, as well as the more wealthy, by promising salvation by faith alone, and ultimate rebirth in the Pure Land, a paradise where everyone may hear the Buddha teaching. It emphasised humility, devotion, and charitable work rather than the individual struggle for personal enlightenment. Focus on Amida Buddha is important and aided by repetition of a mantra including the name Amida Buddha.(Namu Amida Butsu).

Pure Land Buddhism is a very practical form of Buddhism, monks often are married, and social work is very important. In many hotels in Japan, you may find "The Teaching of the Buddha", in both English and Japanese, which is available, just as Westerners might find a Gideon bible. The Buddhist Promoting Foundation (Bukkyo Dendo Kyokai) produces this publication to promote Pure Land Buddhism and makes it freely available to all interested persons.

The book offers the following:

"Therefore, if anyone hearing the Name of this Amida Buddha is encouraged to call upon that Name in perfect faith, he shall share in the Buddha’s compassion. So all people should listen to the Buddha’s teaching and should follow it even if it seems to lead them again through the flames that envelop this world of life and death.

If people truly and earnestly wish to attain Enlightenment, they must rely on the power of this Buddha. It is impossible for an ordinary man to realise his supreme Buddha-nature without support of this Buddha.

Amida Buddha is not far from anyone. His Land of Purity is described as being far away to the west but it is, also, within the minds of those who earnestly wish to be with him….

To those who have faith, He offers the opportunity to become one with Him. As this Buddha is the all-inclusive body of equality, whoever thinks of Buddha, Buddha thinks of him and enters his mind freely"

Thus salvation is dependent on the faithful relationship to the Amida Buddha.

The Zen schools of Buddhism, which are much more well known to us in the West have quite a different approach while still teaching the same core message.

The history of Zen goes back to one of the teaching sessions of the Buddha when he chose not to speak, but to hold up a flower. Only one of his monks understood the message and smiled, and thereafter became a leader in the community.

The message of direct understanding later went to China with a monk called Bodhidharma in the first century AD where the school was called the Ch’an, meaning meditation. Bodhidharma (or Bodai Daruma in Japan) is shown as a fierce, bearded man with open staring eyes, to shock you rather than sooth you. He was said to have meditated for nine years before he taught, and he emphasised the importance of meditation and direct personal experience.

Zen became popular in Japan around the 12th Century, in particular with the warrior class who liked its strict discipline. It was brought to Japan from China along with tea, which is still used in ritual Zen ceremonies. This tea is generally not a tea that Westerners like much and the memory of the ceremony has a strong after taste.

Zen Buddhists teach that everyone has a Buddha nature and that the small mind, our thinking mind, blocks us from reaching that realisation, and subsequent direct experience. In Zen, the follower is aware of the emptiness of all things, and of the interconnection of all life. The logical mind tries to perceive the truth by dealing with concepts, which are, in Zen terms, empty. Therefore, insight must be gained outside that logical process, at a different level. In Zen Buddhism, the key words are direct personal experience, which can occur at almost any moment when realisation occurs.

Zen has simple scriptures, which are not meant to be learned word perfect. The classic Zen teachings are riddles which attempt to take the mind out of the logical process and into a deeper, intuitive understanding. These recorded sayings are called Koans, and are to aid the small mind to let go of the attempt to answer a meaningless question. The classic is "what is the sound of one hand clapping?"

A logical answer to a Koan is not the answer, the answer lies in a sudden new insight into your true nature. We are all part of the Buddha-mind which is basically in a state of peace and serenity, but our human mind and its busy perceptions causes us not to recognise this. 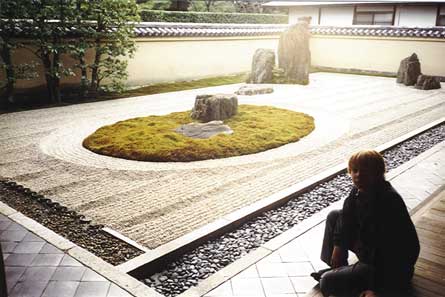 Although meditation is important, Zen teaches that the follower seeks to hold the Buddha-mind in everyday life and this is reflected in the influence of Zen in the Japanese arts, in particular calligraphy, poetry, painting, and garden design. These arts are interpreted in a minimalist way, whereby the essence of the painting or garden is more important than the detail.

Zen monks set the example of incorporating the philosophy into everyday work by undertaking many of the manual tasks around the monastery, and so the gardens and the buildings were built and maintained with the principles of harmony and compassion. 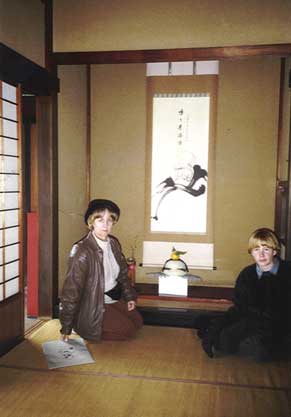 Unlike Pure Land Buddhism, Zen does not focus on images of the Buddha, and a Zen temple is more likely to have stone gardens for meditation, and rooms with a simple flower arrangement or single calligraphy hung on a wall.

Two monks were arguing about a flag.
One said: "The flag is moving."
The other said: "The wind is moving".

An Elder happened to be passing by. He told them:
"Not the wind, not the flag, but the mind is moving."

But then he commented:
"Wind, flag, mind moves.
The same understanding
When the mouth opens
All are wrong"

So, in Zen, an answer at one time may be different to another time, this is the contradiction that challenges us to leave the logical mind and seek answers in the Buddha-mind.

Pure Land and Zen Buddhism use different techniques, essentially both seek to clear the mind, one by reciting mantras and thinking of a particular Buddha, and the other by mind games to free the mind from rational thought. However, they both have the same goal, which is the discovery of the Buddha mind within.