The Life of Buddha

Buddhism is a philosophy, a moral code, and, for some a religious faith which originated 2,500 years ago in India. It offers a diagnosis of the suffering of mankind and provides a formula for individuals to resolve that suffering. It offers a moral code based on compassion and non-violence, and through meditation a way to achieve spiritual insight. Buddhism provides a path to reach a deeper understanding of the nature of reality. Although it directs us inwards, Buddhism offers a practical way to connect with everyday life and with others. Today, an estimated 500 million people follow one of the many varieties of Buddhism.

How did it evolve and where did it begin?

Buddhism began with the Buddha, but who was he?

Actually, he was born Siddhartha Gautama and the term Buddha was a title meaning "the awakened one", or "the one who knows", and was used from the age of thirty-five.

There are two aspects of the Life of Siddhartha Gautama - the historical way and the legend, which has embroidered the story of this amazing man. We will cover the three main parts of his life, the early years as a prince, his search for the truth, and the years spreading his teaching, and some of the details are no doubt part legend.

The historical fact is that around 563BC, in Lumbini, in Nepal near the present border of Northern India, Siddhartha was born. The family name was Gautama and they were the rulers of a small feudal kingdom of the Sakya clan. Increasing urbanisation and trade meant that that there was increasing affluence in that era. .

His mother died seven days after the birth, and he was raised by his aunt, the King’s second wife.

Legend has it that, soon after Siddhartha was born, he was examined by the holy men, who announced that he would become either, a great political leader and would unify India, or a great religious leader. As the story goes, the king, his father wanted his son to follow in his footsteps. So he set about to provide a life of luxury without any hardships for the boy.

Siddhartha wore clothes made of silk, and he grew up in palaces and gardens. Musicians and dancers were there to amuse him. Fearful of the prediction, his father ordered that he be shielded from contact with ugliness, sickness, old age and death.

From about the age of seven, he was trained in athletic skills and was instructed in the spiritual disciplines of the day, and, by the standards of the day, well educated although it is not known whether he could read or write. At that time in India, Hinduism was the orthodox religion, and this was dominated by the Brahmins who controlled the religious process. The teaching was based on the Vedas and ritual was important. The Vedas are a collection of over a thousand hymns, some of which date back to 1200 BC. The Vedas present the world mythologically rather than philosophically. Siddhartha would have been schooled in the Hindu faith and introduced to the many Hindu gods.

When he turned sixteen, the council decided that it was time for him to marry. A young woman named Yasodhara was found and the couple married. Yasodhara soon had a son who was named Rahula.

At this point, he had everything it seemed possible to have in life, but despite all this affluence, Siddhartha in his early twenties, became discontent. The basis for this is a famous legend of the four encounters, or passing sights. If Siddhartha went out of the palace, the king had always first ordered that all those with any disability be hidden from view. The story is told that, one day, Siddhartha saw an old man, bent and trembling, and discovered old age. On the second encounter, he saw a sick man suffering from disease, and on the third journey, he witnessed a funeral procession and a corpse. Finally, on the fourth journey, he met a wandering monk who had an inner tranquillity despite living an austere life, suggesting to Siddhartha that he had come to terms with old age, sickness and death.

The king then called for more festivities to entertain his son, however on the night of his 29th birthday, the young prince renounced his regal life, left his sleeping family, and set out with a servant. Once he was far enough away, he cut off his long black hair, exchanged his fine clothes for simple cloth and sent back his servant and horse.

This decision was not an easy one for Gautama, and in making this choice, he took it upon himself to find out about the origin of suffering and how to overcome it. He did this for his own understanding and for all people.

So now we come to the second part of his life. Gautama took on the life of a wandering monk, accepting food as it was offered to him. He pursued his spiritual quest and studied under the well-known teachers of his day. He learned of deep meditation and followed the yogic practices, but in the end discovered that he reached a point where the teachers could offer him no more. So he left with five followers and he was now called Sakyamuni, sage of the Sakyas, the clan of his father.

It was widely accepted by the holy men of the era, that the body and its desires were an obstacle to spiritual development and that these should be subdued. For six years, Sakyamuni starved and punished his body and lived the most austere life imaginable. In the end, he vowed to try even harder to limit his physical body.

However, at the point of near death, he saw a three stringed lute, a musician's instrument. He was shown that if the string is too loose, no sound is produced, too tight and it breaks, and tuned just right it will produce pleasant sound. He saw that the austere way would not take him to enlightenment.

Gautama gave up his extreme life and began to eat normally again. His five followers now left him, disgusted that he had, in their opinion, been defeated. All alone now, he decided to tackle the quest once again, and he sat himself under a Bodhi tree at a place called Bodh Gaya.and determined not to move until he had found the answers he sought. His meditation was deep, and, on the night of the full moon in May, complete Enlightenment came to him. His mind became calm and clear and he understood the cycle of birth, death and the wheel of life. He understood his true nature and that of all living beings. This was the end of his spiritual journey, and at that moment he became "the Buddha".

The Buddha continued to sit under the Bodhi tree for some time, enjoying the supreme experience and contemplating the future. At first, he doubted whether others could grasp what he now knew, but then he decided that there were those who could be shown the way, and he would dedicate the rest of his life to teaching what he had discovered. He chose the path of greatest compassion for all his fellow men and women. 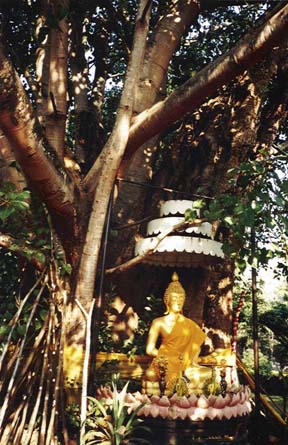 The third part of the life of the Buddha covers the most years.

Gautama was now thirty-five years old. For the next forty-five years, until his death at about eighty years of age, he pursued his life’s mission. The Buddha accepted many men as followers. He even accepted some from the lowest caste, called the Untouchables, which set a new precedent and angered many people who suggested that this would disrupt the existing order of the society.

Despite opposition, the Buddha founded an order of monks and for nine months each year, walked the roads of India, to towns, villages and cities, teaching to whoever would listen. For the remaining three months of every year, corresponding to the wet season, he retreated from public life with his monks.

Unlike the Brahmin priests, he would teach in the local dialects, and spoke to all castes, even those at the lowest levels, as well as to both men and women. While controversial, his words appealed to both beggars and kings. With royal patronage and assistance from some wealthy landowners, his monasteries grew and became permanent places for the monks.

After his father, the king died, his aunt asked the Buddha to allow her to become a nun in the Buddhist order. The Buddha first refused saying that it was not yet time for women to become nuns. She then shaved her head, put on the orange robes of a monk, and, together with fifty other women, went again to the Buddha. After discussing the situation with his advisors, the Buddha allowed the women to join, although they were subject to an additional set of rules. This was a most revolutionary idea for this era, as women had low status in the community. The Buddhist philosophy was then open to all, rich and poor, men and women of all levels of society, and all were equal in the community.

Many others of the Buddha’s own family also became his followers. And, in his own day, he became the best known and loved of all the spiritual teachers in India.

The Buddha never set himself up as an authority figure and there were incidents of internal squabbles between groups of his followers, but most were resolved in due course. His personality was a combination of dignity and friendliness, wisdom and kindliness. He had both a cool and logical mind and a warm heart. In debate, he was courteous and had a strong sense of irony.

The Buddha himself wrote nothing. His teaching was communicated entirely orally and the details we have today are from the writings many years after his death. When he was about to die, at the age of eighty, he lay down on his right side, and urged his followers to ask him questions. At this point, however, they were all silent. Then he spoke his final words, which were: "All component things decay, work on your own salvation with diligence."

Then he passed into a state which is called Parinirvana, and where he completed the process he had begun under the Bodhi tree many years before