A most significant development happened at the same time as the Buddhist movement began to spread and that was the opening of a new way through, from India to China.

Today, we call this way "the Silk Road", and we associate it with famous travellers like Marco Polo, whose journeys to China astounded the Europeans of his day.

The route was first established by the Chinese, venturing out in search of horses and trade, and it dates back to the second century BC. From that time, it became a regular journey for traders seeking to make a small fortune. In the following centuries, the route fell under control of different political groups, but was always well used until the 15th century AD when sea trade dominated.

(Hold the pointer over a location on the map to see its name.)

From early days, silk was exported from China to Italy where it became immensely popular. Grapes and wine making were soon introduced to the East as well as perfumes, spices, unknown animals and birds such as peacocks. From China, we first encountered roses, oranges and pears. There was considerable cost to transport all these items, but the profits were huge for successful traders.

The Silk Road began near Iran and India, went south of the Caspian Sea, and then took one of two routes, along the borders of the Taklamakan desert. The two routes joined in North Western China.

The route was treacherous and crossed huge deserts, as well as difficult mountain passes and steep valleys. A well organised expedition relied on camels and good knowledge of local watering holes. Bandits were common and many traders perished on the journey.

From about the first century BC, Buddhism began its spread along the Silk Road. As it travelled and was accepted, whole communities took the message on board and monks lived along the way. Many ruins exist in the desert regions where numerous finely decorated caves formed the centre of whole monasteries. Some areas have up to a thousand caves in a single group. Many of these caves had beautiful wall paintings and Buddha images which often were sponsored by travellers who sought protection for their journey ahead or gave thanks for having made it that far.

In the middle of the first century AD, a Han Chinese Emperor became interested in Buddhism. He sent envoys to India and in 67AD they returned with Buddhist writings. He then proceeded to have these texts translated into Chinese.

"According to legend, the Han Emperor Mingti, who had already heard of Buddhism, dreamt of a golden figure floating in a halo of light - that was interpreted by the Emperor’s wise men to be the Buddha himself. Consequently, an envoy was sent to India to learn about the new religion, returning with sacred Buddhist texts and paintings as well as Indian priests to explain the teaching of the Buddha to the Emperor. Monks, missionaries and pilgrims began travelling from India to Central Asia and then on to China, bringing Buddhist writings and paintings, while converts followed the Silk Road West."


From the web site on China Pages/Chinese Culture/The Silk Road.

In the north western part of China the majority of the population was Buddhist by the late fourth century and Buddhism was well supported by the ruling classes.

In Western countries, the skill of producing silk remained largely unknown until the 12th century however once this changed, the route began to lose its major significance. With the spread of Islam into the regions around the Silk Road, many of the stupas and temples were destroyed or left abandoned in the desert. 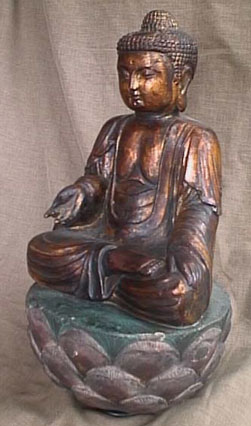 After spreading to China, the Ch’an school of Buddhism developed and this later became the Zen School of Japan. This interpretation of Buddhism is today almost non-existent in its founding country. The need to spread texts contributed to the development of block printing techniques in China. The Pure Land School also began in india before moving into China, Japan and Korea.

In 845, foreign religions were banned in China and a persecution of Buddhist groups greatly reduced numbers. This was followed by the political climate of the 20th Century which discouraged most religious activities.

Although China passed on the Buddhist message, the Buddhist philosophy almost disappeared in China and was to be found in small pockets often around existing temples, and only recently has there been a reversal of this trend.

From China, Buddhism spread into Korea in the fourth century AD and soon after into Japan. Tibet was one of the last countries to accept the Buddhist message. While it was introduced there in about 609AD, it was not widely accepted until the 11th century AD.

While the Mahayana school of Buddhism spread north, along the Silk Road to China, Korea, Japan and Tibet, the Theravada school lost ground in the early years because the main financial support was for the Mahayana expeditions.

From India, Buddhism first went to Bengal and then Sri Lanka early in the third Century BC. Sri Lanka became strongly Buddhist and followed the Theravada model. It was here that many of the early teachings were finally written down.

From Sri Lanka, monks went to Burma in the 5th Century but it was not until the 12th Century AD that Buddhism became widely established. Thailand took on Buddhism in the 13th Century AD, with Laos and Cambodia also taking on the teaching soon after, all following the Theravada school. At the same time, by the 15th Century, Buddhism had virtually disappeared from India, and has never been a major influence there ever since, although there have been some revival in particular areas. 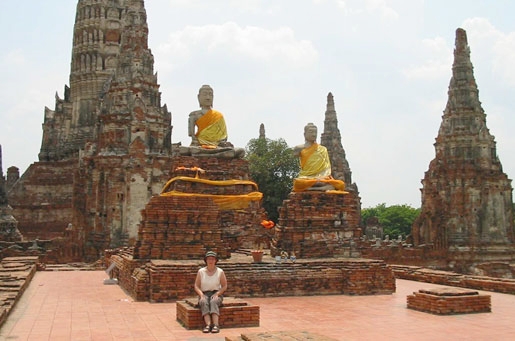