Vajrayana Buddhism and Buddhism in Tibet 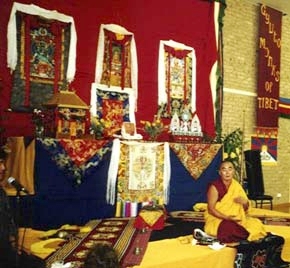 The main two divisions of Buddhism are Theravada, the way of the elders, and the more popular Mahayana, the bigger way, the greater raft. There is also a development of the Mahayana group, which is called Vajrayana, to mean the Diamond Way.

The term "vajra" originated in Hindu mythology and was the diamond hard thunderbolt used as a weapon by the gods. This became an object of Buddhist authority, similar to a royal sceptre.

The Vajrayana Buddhists accepted a tantric way of practice, using ritual, religious images, diagrams, chanting, and song. Tantric Buddhists incorporated Hindu chants and initiations into the philosophy which evolved in India about 600-700AD. 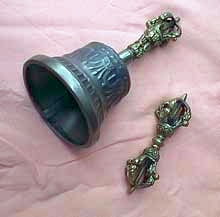 Vajrayanan Buddhism still exists in pockets in many countries, but it reached its full potential, and further developed, in Tibet.

Tibet was a latecomer to Buddhism, and an Indian monk, Padmasambhava, also called Guru Rinpoche, who followed the Tantric school in Indian, came to Tibet in 747AD and established the main Tibetan schools.

Many of the original texts were translated into the local language, and after Buddhism declined in India, Tibet became a primary centre of learning about Buddhism. Buddhism did well in Tibet and enjoyed royal patronage.

Tibetan Buddhism is very colourful, and full of images of deities and demons often drawn in a ritual diagram called a mandala, which would often represent the whole universe. Strong smells of incense and butter lamps, and loud trumpets and cymbals are used to engage the senses. Dancers wearing fiece and friendly masks perform ritual dances to offer protection and to appease the spirits, while monks beat drums and chant.

One of the most common chants in Tibet is the mantra "Om mani padme hum" which says "O, jewel in the lotus". (Click here to listen to a Tibetan chant.) This is often found on the prayer wheels and flags of Tibet. The jewel is symbolic of the teaching, and the lotus of the Buddha.

A Vajrayana monk will undertake a long course of study as part of his training and will study aspects of the Theravada, Mahayana and Tantric schools. The training will often be over twenty or thirty years long and after that the monk may reach the position of a religious master, called a lama. The Tibetan tradition gives great importance to the personal teaching from the master to disciple.

The most well known lama is His Holiness, the Fourteenth Dalai Lama, spiritual head of one of the main Tibetan Buddhist groups, and also highly regarded for his promotion of Buddhism and as a spokesman for the now Tibetan area of China.

Tibetan Buddhists believe in the reincarnation of the essence of the Dalai Lama. When the thirteenth Dalai Lama died in 1933, a search began for the new Dalai Lama. He was located four years later, at the age of two, after following signs which had appeared soon after the death of the previous Dalai Lama. The young boy was presented with objects from the former Dalai Lama, as well as other similar objects.

Picture with permission from
"Images: The Dalai Lama in Australia 1996"

He correctly selected the items, and, at the age of four, was taken to Lhasa to begin his training.

The word Dalai is Mongolian meaning "ocean", and the Dalai Lama is a term which also means "an ocean of wisdom".

The Dalai Lama became the spiritual and political leader of Tibet when he was fifteen. In 1950, China took over Tibet, and in 1959, the Dalai Lama left Tibet and now lives in Northern India, at Dharmsala. In 1989, he was awarded the Nobel Peace prize for his work, in particular for his commitment to peaceful solutions without use of violence.

The Dalai Lama teaches that compassion is at the heart of the Dharma, and, in his words from his book " The Four Noble Truths"

, he says that "it is on the basis of profound compassion that we develop the altruistic aspiration to seek enlightenment for the benefit of all". This shows the strong influence of the Mahayana path in Tibet and the desire to help others on their spiritual quest. 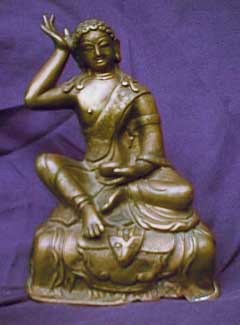 Tibet’s history is rich with many varied and inspired monks and lamas, and each has their own unique story. One of the interesting Buddhists teachers was a man called Milarepa, who was born in 1040 and died at the age of 83. Although never ordained as a monk, he pursued a spiritual path in life, and was a prolific writer of poems and songs. His work is still widely read today and can be easily found on the Internet where the following words of Milarepa were located:

"I have understood this body of mine to be the product of ignorance, composed of flesh and blood and lit up by the perceptive power of consciousness. To those fortunate ones who long for emancipation it may be the great vessel by which they may procure Freedom.

But to the unfortunates who only sin, it may be the guide to lower and miserable states of existence. This, our life, is the boundary mark whence one may take an upward or downward path. Our present time is a most precious time, wherein each of us must decide, in one way or other, for lasting good or lasting evil." 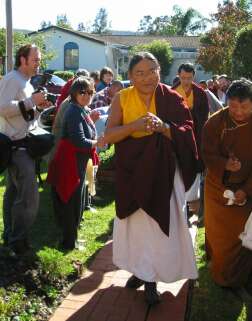 His Holiness Sakya Trizin on an Australian visit.

From Tibet, the Vajrayanan Buddhism spread into Mongolia, Siberia, Nepal, and the kingdom of Bhutan. Bhutan is country which is ruled by a young king who has embraced a strategy of ecomonic development in partnership with conservation and care of the environment along strong Buddhist guidelines. Today, Bhutan still has over 70% of its virgin forests, and is being studied on a global level for the wealth of the vast plant gene pool.

Today, the four main schools of Tibetan Buddhism are all alive and active and have spread their influence around the globe. Monasteries with senior monks from Tibet are found in many Western countries and you may find details on some of these on the Internet as they develop their philosophy using tools of the technological age.