The Three Characteristics of Existence

We have previously discussed suffering and its pivotal position in the teaching of Buddhism.

The Buddha in fact defined three main characteristics of existence, which include suffering, impermanence and the concept of no unique self.

Suffering, as defined before, comes from life, as sickness, loneliness, old age, or just a general feeling of life not being what it should. Part of the problem is, that we wish life to be permanent when all existence is impermanent, everything is subject to continuous change. Birth and death are part of that process of change.

All life, yours, mine, your family and friends, is like a flowing river. While it may appear the same when you look at a river, each moment is different and every view of the river is different. Nothing in nature is what it was the moment before. Every living thing is in a continuous state of flux.

In our lives, our bodies grow when we are young, and change as we age. Relationships come and go, often because personalities, interests and attitudes change.

As we live, we take on both positive and negative habits and we cling to ideas which we associate with "our permanent selves". But our permanent self is a myth, and once we learn that, we can look beyond the need to have life stay the same. 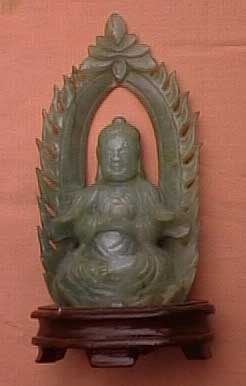 The most challenging concept for those brought up in a Christian community is the concept of "no self". I haven’t used the term "soul" as Buddhism puts a different emphasis on this.

While the Buddha saw life continuing after death, he described it more as the lighting of one candle by another, the flame originates at the first flame, but the second is a consequence of the first, and not a unique reproduction of it.

Essentially, however, he saw us as a collection of body, feelings, perceptions, mental formations, and consciousness.

While he saw no separate self or ego, he did emphasize the interdependence of all life as well as dependence on what had gone before.

The concept of no eternal self was also radical in the era in which the Buddha lived. Hinduism, the main religion of India at that time, generally accepted the idea of the eternal self. The body is destroyed but the self lives on. And that was an unchanging identity which was locked in by fate to a particular way of life and determined which caste system you belonged to.

The Buddha rejected this Hindu concept and taught instead the interconnectedness of life. Each self has no fixed reality, but is a constantly changing self and dependant on changing conditions.

So each person has a physical body which is dependant on food and warmth, and develops in response to those inputs and to the ageing process. Our feelings change with our mood and our time in life, and as a direct result of perceptions which comes from what we see and hear around us. We make decisions based on our feelings and perceptions and these constitute our mental formations.

From these four, body, feelings, perceptions, and mental formations comes consciousness which is dependant on the other four. And the sum of these is what we refer to as self, so therefore, according to the Buddha, there is no fixed definable self. You are still there, with a personality and feelings, and with tremendous possibility for change, and not locked in to some rigid fate, because your nature is built on change.

In fact, the Buddha took a middle way on the definition of self. He saw the self as dependant on everything that had gone before, and constantly changing in response to an interconnecting and changing reality. While we are not permanent and fixed entities, we are certainly part on the on-going reality.

Once this is understood, once interconnectedness becomes part of the way of seeing the world, then suffering arises from the personal concept of an independent self.