An early Buddhist teaching says: "What we are today comes from our thoughts of yesterday, and our present thoughts build our life of tomorrow. Our life is the creation of our mind".

Karma means intended action, and is a dynamic concept. It is not fate or predestination, but a consequence of what has gone before. In other words, you are now in circumstances because of your thoughts and decisions, and this is an on-going process. That is, new actions create new Karma. 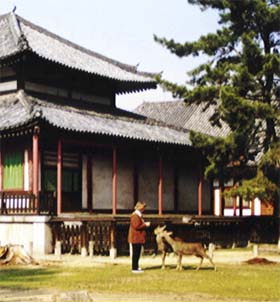 Intention is a major part of Karma. If you come home and accidentally trip over the dog and hurt the animal, this is not intended and has no effect. However, after a hectic day, you come home and kick the poor dog, then negative Karma is generated. All the combined intended actions add up to what you are now.

The Buddha saw this as an explanation of the different circumstances that all living beings find themselves in.

Karma is closely linked with dependent origination, where it is the consequence of the law of cause and effect. In the Bible, it says that we reap what we sow, and karma has the same impact.

Obviously, we also are subject to non-karmic forces such as the ageing of our bodies. And there are circumstances, which are natural and also affect our lives. But in addition to that, the Buddha said that we are subject to this karmic effect where the ethical actions and thoughts we have will have a positive effect on the future and on our spiritual development.

In the book " Glimpse After Glimpse" by Soygal Rinpoche

, the Buddha is quoted as saying:

"Do not overlook negative actions merely because they are small; however small a spark may be, it can burn down a haystack as big as a mountain."

And the Buddha also said

"Do not overlook tiny good actions, thinking they are of no benefit; even tiny drops of water in the end will fill a huge vessel."

In the West, we often associate Karma with fate and it has this idea of a future which is predetermined. In Buddhism, Karma is the reaping of past actions, but also offers the possibility of determining our own future with our actions and thoughts today. This means that no future event is locked in, and what happens today and tomorrow will create the personal and global world of the future.