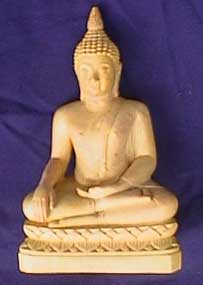 After the Enlightenment, the Buddha walked over one hundred miles to India’s holy city of Benares. In a deer park near the city, he preached his first sermon to the five followers who had previously renounced him. This sermon formed the basis of his teaching from then on. He spoke about The Four Noble Truths.

The Four Noble Truths which came to the Buddha at the enlightenment, revolves around the logical process of seeing life, seeing all actions, not as we wish to see them, but as they really are.

The first truth is that life always incorporates suffering or Dukkha as it was called then. Dukkha has a broader meaning than suffering. It can be the feeling you experience when you encounter pain, old age, sickness, loss, or separation from loved ones, but it can also represent a general unsatisfied feeling. If you feel that your life is like pushing a supermarket trolley which always wants to go in a different direction, then that’s dukkha.

In " The Vision of the Buddha" by Tom Lowenstein

The second noble truth is that suffering in its broad sense, comes from desire, and specifically, desire for meeting our expectations and for self fulfilment as we see it. By desiring for ourselves rather than the whole, we will always have suffering.

In the same way that a child wants a new toy and then, having achieved that, will long for yet another, we seek fulfilment of our desire, to then move on to another. All the time, our lives are only temporarily satisfied.

So far, that’s the bad news. In the language of many teenagers "Life Sucks".

But Buddhism is a positive philosophy, and the next two noble truths give us an optimistic message.

The third noble truth tells us that if our attachment to desire ends, so too will the suffering. Specifically, if we change our perception and reduce our attachment to desire, suffering will also reduce. This is not intended to lead to a cancellation of the zest for life, but to an understanding of the nature of life and to controlling those desires which come from that lack of understanding.

The fourth noble truth shows the way to the ending of suffering. The Buddha said that the way to cease suffering is to follow the middle way, the Noble Eightfold path. This provides the guidelines for day to day living. There is some analogy here with the Ten Commandments in Christianity, but the eightfold path is meant as a guideline rather than a strict rule.

The Buddha reached this middle way after himself living the extremes of life. In his early years, he was surrounded by luxury, given access to all pleasures available at that time. In his search, he lived the opposite life, one where he deprived himself of even the essentials, and faced death. The Noble Eightfold path leads to a way, which embraces life and is neither indulgent nor austere.

When the Buddha gave this first sermon to the world, he is said to have set in motion the Wheel of the Law. And the wheel as a Buddhist symbol appears over and over again in Buddhist art, symbolising the cyclic nature of existence.